KH-KIPPER » What did KH-KIPPER show at the IAA 2018 Exhibition in Hannover?

What did KH-KIPPER show at the IAA 2018 Exhibition in Hannover? 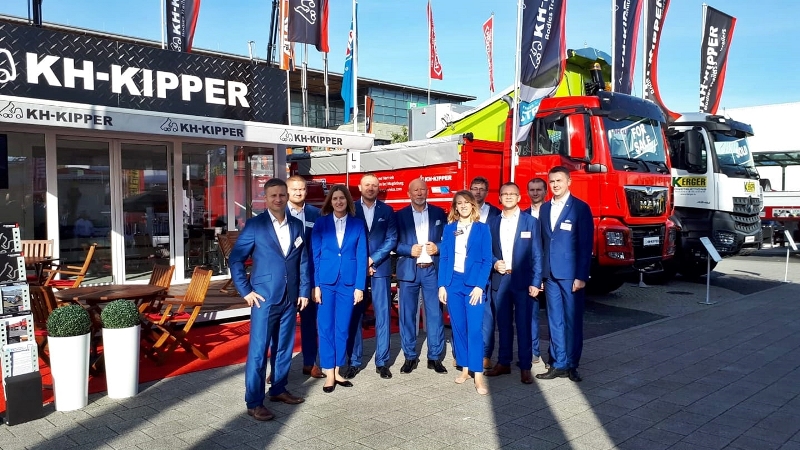 The IAA International Commercial Vehicle Exhibition shows that the transport industry is in a great condition. In the capital of Lower Saxony a lot of attention was paid to innovative solutions including electric vehicles and stunning concepts of autonomous vehicles. 90% of KH-KIPPER’s bodies are exported not only to European markets but also to more remote parts of the world. Therefore, the exhibition in Hannover is a perfect place for meetings with foreign customers.

With the support of KH-KIPPER’s distributors from Germany and Luxembourg, the Polish producer presented two tippers with construction bodies at the outside area. MAN 6×4 with a three-way tipper W3H was equipped with a left hydraulic wall allowing for unloading of loose material within some distance from the vehicles’s wheels. Whereas on the Mercedes-Benz 8×4 chassis with rear-tipping W1U body, a Marcolin electric covering system was mounted. An original Transcover covering system could also be seen on KH-KIPPER’s three-way tipping body type W3H on VOLVO 6×4 chassis presented at the stand of the British company.

On the first day of the exhibition KH-KIPPER organized at its stand a press conference devoted to tipper design. Modern, industrial design combining functionality and aesthetics becomes more and more significant not only in branches such as packaging, phones or housing interior but also in transport vehicles. Design is the engine of tippers development allowing to adjust the product to individual needs of customers. It becomes more and more significant even with vehicle producers who until now worked only according to a set standard and their vehicle’s modifications were possible only to a limited extend.