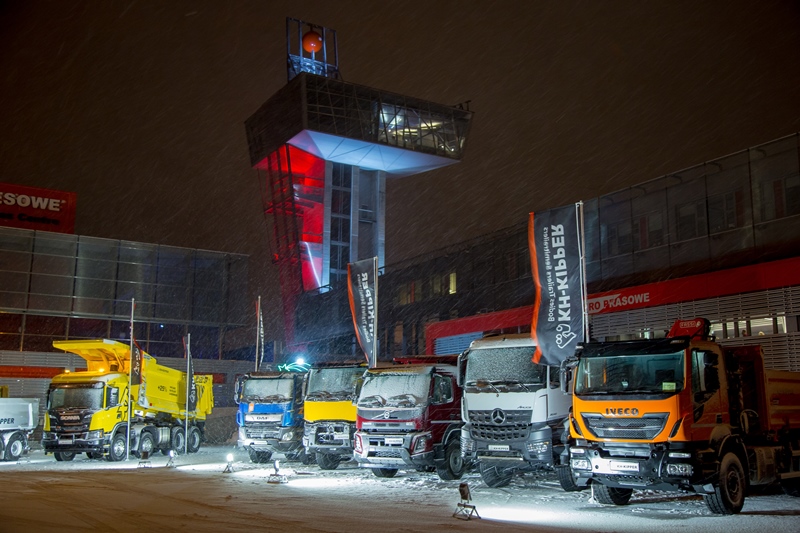 On 18th January 2018 KH-KIPPER organized a formal jubilee gala in the Kielce Congress and Exhibition Centre on the occassion of  the company’s 20 years of existence. The jubilee was celebrated by 300 guests who, despite the bad weather, came to Kielce from all over Poland and abroad. Kamionka’s family company brought back to memories its incredible story and presented future, ambitious plans.

The press conference preceding the official party was held in the viewing tower of the Kielce exhibition centre from which one can see the panorama of the city. The Founder of the company Konstanty Kamionka and current President Andrzej Kamionka spoke about their achievements to the local journalists and trade media dealing with trucks subject.

The exciting laser show with tippers in the lead has added splendour to the formal gala. After the show, the Founder of KH-KIPPER, Konstanty Kamionka together with his family made a warm welcome to the guests: clients, business partners, municipalities representatives and trade media.

The President Andrzej Kamionka, who took the lead in the company in 2014, presented shortly the company’s  successes and nearest goals. In the last few years the company has doubled its operation scale – both in terms of the number of delivered products and value of sales.

The official part of the event was followed by the ceremony of honorable mention to the company’s partners who have built the KH-KIPPER’s success together with theirs over the years. The title of „KH-KIPPER’s success co-founder” was given to long-term clients, dealers, importers, chassis producers, suppliers and employees. All in all, the honourable mention was presented to several dozen of people from Poland, Germany, France, Lithuania, Serbia, Holland, Bulgaria, Russia, Ukraine, Denmark and Norway.

The artistic impression of the guests was looked after by two charming singers serving pop music hits. And after the delicious cake, there was a great number of guests lining up to the hosts to congratulate them on this day.

The KH-KIPPER’s 20 year jubilee was an opportunity to present the international success of the company to the guests. Today, the company employs over 400 people full-time and has production capacity of 1500 units of bodies, trailers and semi-trailers per year.  Approximately 90% of the company’s production is exported. The tipping bodies with KH-KIPPER logo are used in mines and construction sites in the most remote places in the world: in Europe, Asia, Africa, South America, and even Australia and Oceania.