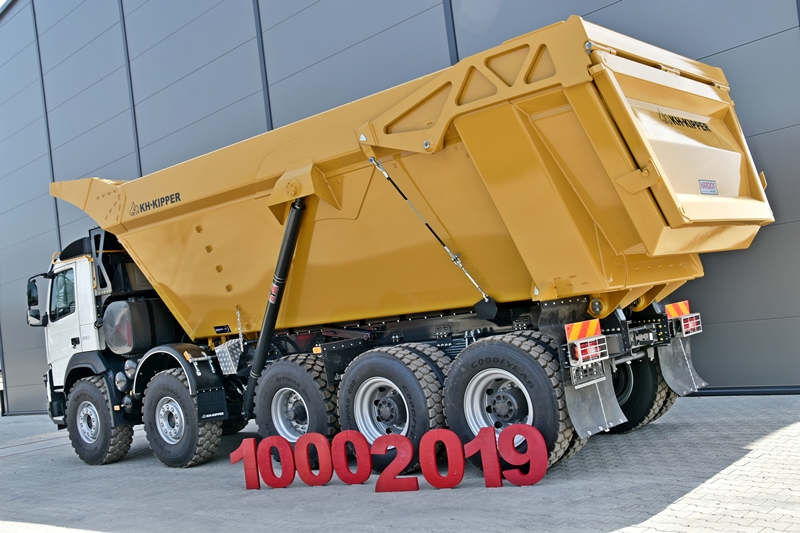 KH-KIPPER is a company near Kielce which has been operating for 20 years now and exporting its bodies nearly to all continents. The company has been also recording a constant growth in production and turnover in the last 10 years and thus, this June a new production record was set. Comparing to the previous year, the company produced its 1000th units a month earlier and it looks as though this year will also be closed with a record number of bodies, trailers and semi-trailers.

The whole production process takes place in Poland. Approximately 45 bodies leave KH-KIPPER factories in Kajetanów and Skarżysko-Kamienna every week and the yearly production equals over 2000 units of bodies, trailers and semi-trailers. In order to meet the demands, the construction of the new final assembly hall and office building started last autumn. The hall is nearly finished and it is expected to be available for use soon.

KH-KIPPER bodies work in mines and construction sites all over the world – in Europe, Asia, Africa, South America and remote Oceania. However, the dynamics of KH-KIPPER’s export in the last years has definitely increased mainly in Western and Northern Europe. However, very important delivery destinations still remain in Eastern and Southern Europe as well as the ones outside „the old continent”. The 1000th unit on VOLVO 10×4 will transport the mining product from the extraction place to the crusher in one of the gold mines in Africa.

Mining tippers work in the most difficult exploitation conditions and after appropriate preparation of the transport route they can successfully replace the mining dump trucks. The loading capacity of the 10×4 vehicle equals 50 tons and the volume of the body is 30 m3.  Due to the extreme exploitation conditions, the main construction of the body is made of high-resistant HARDOX steel (floor 12 mm and side walls 8 mm) and the roof over the cabin as well as top profiles of a strong STRENX steel. 2 HYVA double acting hydraulic cylinders increase the stability and safety during unloading and shorten the time of the tipping cycle.