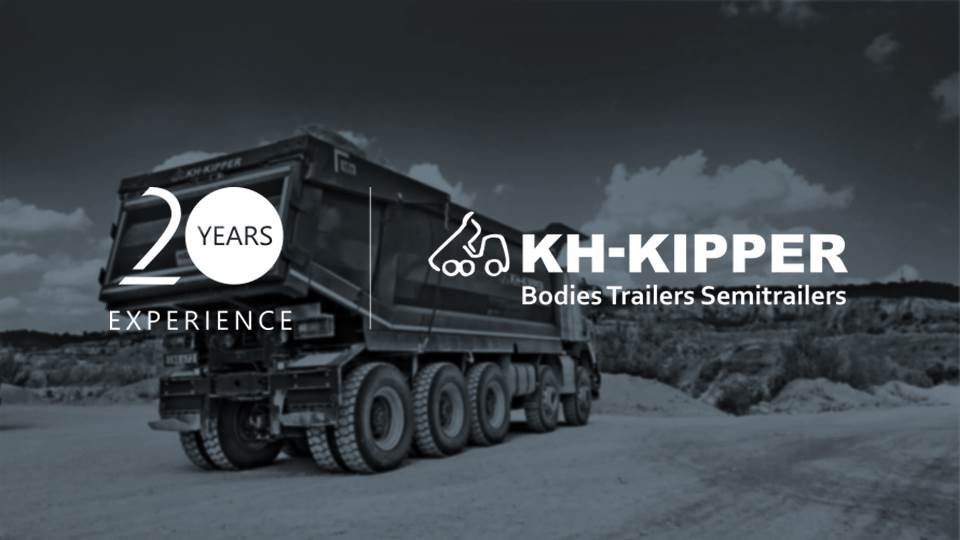 20 years ago in Kielce KH-KIPPER company producing bodies for trucks was established. In 1998, that is in the following year since the company’s inception, the first 16 bodied tippers came from the production plant in Kajetanów near Kielce. The work team was at that time a dozen people or so. Today the situation is diametrically different because KH-KIPPER has become a leader in the production of tipper bodies employing more than 400 people and having production capacity of 1,500 units a year. The bodies with KH-KIPPER logo are mounted on trucks in the most distant corners of the world and the brand is well known and respected in the industry in Europe and beyond.

INDUSTRIAL TRADITIONS OF THE REGION
Kielce is the region with the traditions of industry and machinery manufacturing. The development of local industry has been driven primarily by the location and availability of rich mineral resources. These lands were once part of the old industrial districts. It was here several decades ago that well-known Fabryka Łożysk Tocznych “Iskra”, Zakłady Urządzeń Chemicznych i Armatury Przemysłowej Chemar or Zakład Wyrobów Metalowych SHL, where famous SHL motorcycles and popular washing machines Franias, field kitchens and bodyworks on chassis of Polish truck brands of Jelcz and Star were built in the 20th century.

In 1978, the founder of KH-KIPPER – Konstanty Kamionka, started work as a young designer of tankers and distributors at Kieleckie Zakłady Metalowe SHL. Then it was a large company. In the design office itself, with a prototype and dies workshops, there were 180 employees. Although with SHL he had gained valuable experience and was entrusted with more and more responsible projects, he already quietly dreamed of being able to decide on important things about the product he was creating. He worked at the factory for 17 years until 1993, when he and his colleagues set up the firm Kamarg to repair tankers. At first the company was registered as a civil partnership, and then merged with the Belgian company Stokota in 1995 to become a limited liability company. In Kamagra Konstanty Kamionka worked until the moment of merging with Stokota. In the meantime, in 1994, he joined Schmidt Polska, where he worked for four years as head of production.

WHERE DID THE NAME KH-KIPPER COME FROM?
More than half a year before leaving the previous company Konstanty Kamionka founded the company KH-KIPPER. His partner was then Cornelis Harrewijn – Technical and Production Director of Schmidt. The intention was that the name of the company be identified with the owners and at the same time be legible to all customers, both Polish and foreign. The first part of the company name – KH, or Kamionka and Harrewijn, was created just after the founders’ names. Whereas the other part of the name, the word “kipper” was chosen, meaning tipper, commonly known, used and similarly sounding in Poland and many other countries. These elements and the outline of the tipper added by the sales department are also included in the corporate logo.

RISK IN BUSINESS
After some time, the KH-KIPPER was joined by one more partner. It was another Dutchman – Maarten Vinkesteijn. With his entry, the shares in KH-KIPPER were divided into three parts. Unfortunately, more than a year after the founding of the company, in 1999, Kamionka’s first partner, Cornelis Harrewijn, had a serious car accident and did not return to work after that. Previously, while working with Schmidt and KH-KIPPER, he succeeded in giving KH-KIPPER a new insight into contemporary entrepreneurship, teaching how to take risks associated with running a business and the economic activities that existed in Poland at the time.

THE POWER OF FAMILY
Konstanty’s wife, Zofia Aleksandrowicz-Kamionka, before she devoted herself to KH-KIPPER, worked for more than 20 years at Kielce University of Technology. She was a lecturer in computer science. But the time came that her help became essential in the company. After completing her education, she held the position of chief accountant at the beginning and later became the director of finance.
Zofia and Konstanty’s childern are also committed to work in the company. Andrzej – the President – is a graduate of the Faculty of Electrical Engineering of Kielce University of Technology. He has been working for KH-KIPPER since the very beginning. He began to help in his family business while still a student of Secondary Technical School of Electrical Engineering. Initially he worked on production line and helped with the service of fair events and product demonstrations. Later he worked in the company’s sales department.
Also daughter Anna and her husband Tomasz Biel are working at KH-KIPPER. They both graduated from Kielce University of Technology. Anna is the deputy finance director and her husband vice president and production director.

ROAD TO SUCCESS
Since the beginning KH-KIPPER’s headquarters has been located in Kajetanów, a few kilometers from the center of Kielce towards Warsaw. First it was a leased facility owned by Świętokrzyskie Przedsiębiorstwo Robót Drogowych TRAKT.
In 2001, a 2.5-hectare plot of land with a 1000 square-meter hall was redeemed and thoroughly refurbished.

In 2003, another modern production hall was opened in Kajetanów. In the same year, first rear tipper body – currently the most popular KH-KIPPER product exported to dozens of countries, left the production plant.

Thanks to effective sales strategy from year to year it was possible to significantly increase sales of products to other foreign markets.

In order to increase production capacity in May 2007 a facility was bought that had previously functioned as Mesko in Skarżysko-Kamienna. The hall with an area of over 3,000 m2 surrounded by hectares of land was then in poor technical condition.

The current two production sites are divided functionally. In Skarżysko-Kamienna, only frames and bodies are produced, which are then transported to Kajetanów, where they are further processed.

The third production hall in Kajetanów with an area of 2,500 m2 was also launched in the same year 2007.

Since 2009, when there was a drop in production due to the global crisis, the KH-Kipper has expanded its offer with many new products, among other things, dump trailers, container tipper, containers and other special products.

In 2011 a modern service hall was launched. Today, KH-KIPPER service is provided by KH-KIPPER service personnel who have a specially equipped car for mobile service and close cooperation with authorized external service not only in Poland but also abroad. The largest service network is located in Poland and Germany, but services are also available in France, Switzerland, Austria, Lithuania, Ukraine, Romania, Serbia, Bulgaria, Georgia and Estonia.

Since 2009, when the international market collapsed, the company has been showing an upward trend. With the increase in production and expansion of plants, there is an increase in employment, which currently represents more than 400 employees. KH-KIPPER’s well-knit team consists of experienced and committed professionals working in areas such as manufacturing, sales and delivery, product development and administration. Many of KH-KIPPER’s employees have been in the company since the outset, building the success of the company for 20 years.
KH-KIPPER’s great business is undoubtedly the merit of effective teamwork and approach to the tasks of the customers and suppliers in a collaborative way. KH-KIPPER also cooperates closely with Kielce University of Technology. If needed, the local university performs the research or calculation interesting for the entrepreneur. Many students and graduates also find their practice or employment in KH-KIPPER (currently 87 graduates are employed).

In the recent years it is mainly Germany and Scandinavia where the KH-KIPPER export growth rate was by far the highest. Developed countries in Europe are now the main KH-KIPPER outlet. No less important direction of deliveries is still Eastern and Southern Europe, South and deliveries beyond the “old continent”.

About 30 bodies leave KH-KIPPER every week, and annual output is about 1,500 units of bodies, trailers and hook lifting devices. Average annual turnover fluctuates within 120 million PLN. KH-KIPPER is a leading manufacturer of bodied tippers for chassis over 12 t DMC. KH-KIPPER tipper trucks have customers around the world – in Europe, Asia, Africa, South America or Australia and Oceania.

As the company’s strategy is based on continuous product enhancements and broadening its offerings, many vehicles are continually improving every year. A complete machine park and own design office and sales department allow for a flexible approach to the projects. Manufacturing facilities include robotic welding, laser cutting, numerically controlled machining, and molding by pressing and rolling.

Production takes place in Poland. In its bodies KH-KIPPER uses only high quality materials and components. Every day, the deliveries of steel, lacquers or hydraulics of the best domestic and global manufacturers come to Kajetanów. Although the assembly of ready-made bodies on the chassis is mainly done in Poland, many customers order it with delivery in parts as a self-assembly kit.

KH-KIPPER has several dozen partner companies in the country, which are permanent subcontractors with technical and logistical support and support for production and documentation infrastructure.

Also, participation in the world’s motoring and construction exhibitions such as the IAA in Hannover, Bauma in Munich, Comtrans and Mining World in Moscow has permanently entered into the calendar of events at which KH-KIPPER continues to present its news.

20 years of existence is an important event and a reason for pride. The long list of products and customers confirms that KH-KIPPER’s development is characterized by the quality that users need. The round jubilee is also a good impulse for making new decisions and for bold development plans for new products, outlets or expansion of production infrastructure. All the more so, for the last few years, the scale of the company’s operations has recorded double-digit percentage increases. Also, enjoyable is the fact that the jubilee year is also a record year for the company – the best in the history in terms of sales value and quantity of units produced.