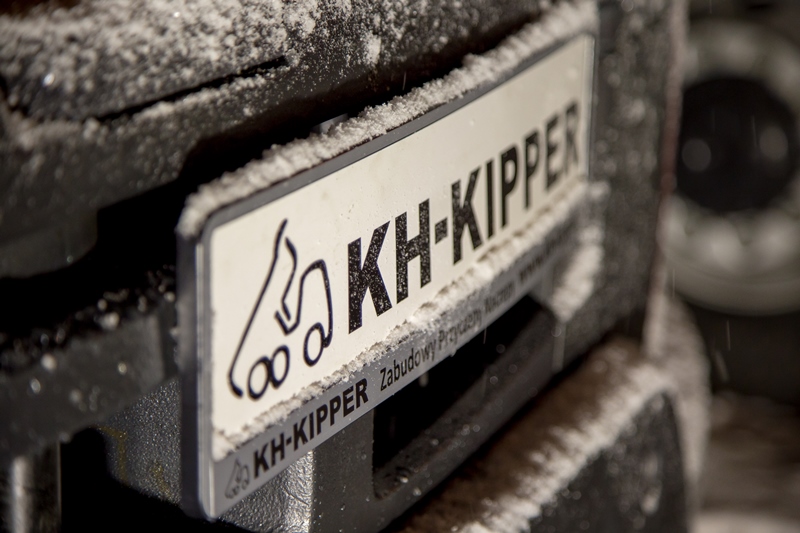 In 2018 KH-KIPPER has made its 15000th product. In the last 20 years the company has not only managed to hold its position on the difficult market of utility vehicles but also every year is doing better and better. In the last 4 years it has doubled the scale of operation. In 2018 it reached over 20% of increase in sales and production closing the year with a 160 million zloty turnover and 1800 units of bodies, trailers and semi-trailers.

Increase of the production capacity
For the first time in history KH-KIPPER is closing the year with the number of 1 800 units. The 1500th unit of year 2018 was already produced at the beginning of November. The company „grows” together with its customers. In 2018 the company started big investments which aim at increasing the production capacity. The construction of the new office and a modern assembly hall with social facility is now taking place in Kajetanów. The producer is also planning to focus on improving the organization, internal logistics, working conditions as well as purchase of new machines and equipment.

Clients always come first
As far as the activities focused towards the clients are concerned, there was also quite a lot going on. KH-KIPPER started the year with a 20-year anniversary party. The jubilee gala with over 300 guests from all over the world took place in the Kielce Congres Exhibition Centre in January.

In May KH-KIPPER was also present at the Autostrada-Polska, Rotra Exhibition where the trucks were not only presented on the company’s stand but also took part in dynamic  shows in which the visitors could see the construction vehicles at work.

The new model of the classic square body W1CE had its premiere in August. The body is supposed to be a universal product for the extreme weather conditions – from freezing Syberia to hot climate of Africa. In any place where a simple and, at the same time, strong, reliable and universal product with an efficient floor heating is needed.

In the same month, at the IAA in Hannover, the W1MV mining body has received a nomination for the 2019 Trailer Innovation Award promoting exceptional ideas and product innovations in the trailer and body industry. The KH-KIPPER’s award collection was also completed by prestigious honorable mentions such as Forbes Diamonds, Business Gazelles and Wprost Eagles.

In 2018 KH-KIPPER’ s products could be seen in numerous exhibition events in the country and abroad: from the Intermat construction fairs in Paris to Mining World in Moscow. However, the most important exhibition project from the point of view of organization and sales was the September IAA Show. In Hannover, the Polish exhibitor presented at its stand 2 construction bodies which are very popular among western customers. One more KH-KIPPER tipper, with a three-way body, was presented at the stand of Transcover company – the British distributor of tarpaulins. In 2019 KH-KIPPER is again planning to show up in Germany – this time at the Bauma construction fairs in Munich.

Taking into consideration the clients’ convenience KH-KIPPER has also been working on developing the sales and service network. Lately, new distributors from Luxembourg, Germany, Russia, Hungary and Bulgaria have joined the KH-KIPPER group. In 2019 the Polish producer wants to maintain the leader position in Poland as far as tipping bodies on trucks are concerned and keep developing on foreign markets. Today 90% of KH-KIPPER products are sold abroad.