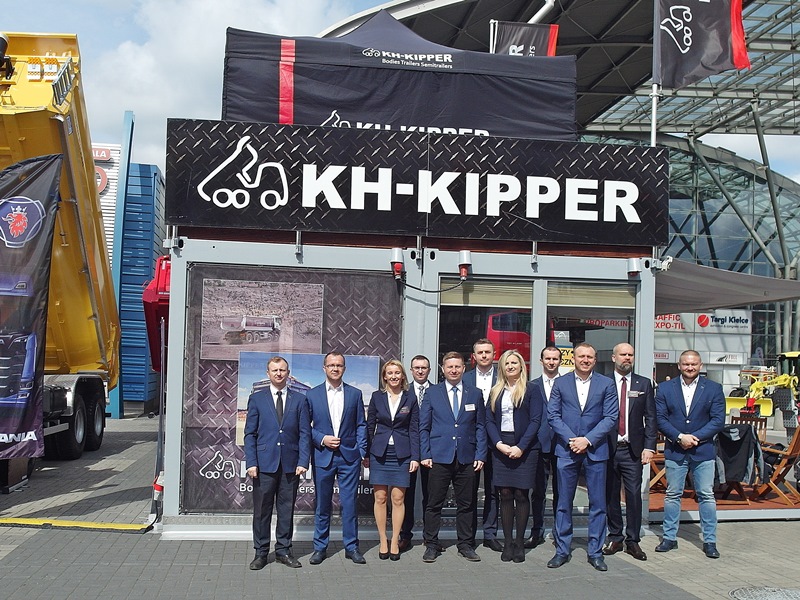 Kielce’s manufacturer brought two new releases to the Autostrada-Polska Fair, and these innovations were appreciated by the trade fair committee. At the official gala on May 9th, Andrzej Kamionka, President of KH-KIPPER, received two awards: a medal for a 3-axle frameless trailer and an award for a mine structure that is 20% lighter in comparison to the predecessors.

Innovative semi-trailer has been created mainly for the transportation of loose materials used in construction such as sand or gravel. But, transport is not the only job that a semitrailer can cope with. What distinguishes it from European market counterparts is, among others, the possibility of even distribution of material on the road directly from the box. The ability to easily leave the muddy terrain or unloaded material area assures assembly of the box directly on the back of the trolley. The traditional frame has been replaced by a frame with joints that creates a spatial structure at the time of tipping.

The characteristic feature of the awarded in the competition new mine structure is the lack of the necessity to reinforce of any floor elements. Thanks to the elimination of unnecessary elements, the elasticity of the structure results in an increase in the durability of the box and its resistance to damage. Lowering the weight of its own structure significantly increases its capacity.

At the stand KH-KIPPER presented the best-selling products. Rear dump and three side structures with hydraulic sideboard are available on all chassis. – KH-KIPPER is presenting its products every year at the Autostrada-Polska Fair and we generally evaluate them positively. A large part of our customers visited us at the Fair and got acquainted with the products we are presenting. Customers from Ukraine, Russia, but also from Belgium and Luxembourg came to visit us. Of course, next year we plan to exhibit our products as well – said Łukasz Karczewski Sales Director of KH-KIPPER in an interview for the Kielce Trade Fair TV.

The wide range of construction and mining structures on the stand is not the only offer provided by KH-KIPPER. On the test site for three days dynamic demonstrations were held in conditions similar to those of the real construction site. KH-KIPPER’s dynamic dump trucks were accompanied by a short demonstration showing the loading and unloading of two frameless trailers.